West Coast Wasteland: Why the GOP Struggles in California

As 2016 quickly approaches, Republicans are struggling to find top recruits in a trio of competitive House districts in California — a state where the party has suffered defeat at the congressional level for decades.

The National Republican Congressional Committee sent a staffer out to the Golden State last week to search for and meet with potential candidates and convince them to run in competitive districts in San Diego, Palm Springs and Sacramento, according to a source with knowledge of the visit.

But after a string of losses in the state, multiple Republican strategists in California are pessimistic about the GOP's ability to recruit top-tier challengers, especially for 2016, when presidential-year turnout is expected to benefit Democrats. It's a similar problem Democrats face at the House level across the rest of the country, where GOP waves in 2010 and 2014 have made recruiting in some states a challenge.

Richard Temple, a California GOP consultant, said a major problem for Republican candidates running in the state is that they are weighed down by the national GOP's brand. He said the image could be fixed if the field of candidates Republicans recruit reflected the party's growing diversity, but he said without donors believing those candidates can win, getting them to run will be hard.

"I just think the reality is they're not going to get anybody good," Temple said. "They can't make the case for donors to put money here, and that’s the rub. We accept generalized reactions so, the view from donors is [Republicans] can't win."

Republican strategists say part of the problem is that Republican hopefuls have seen a downward trend in the number of seats the GOP has held in the state's massive congressional delegation over the past few decades. 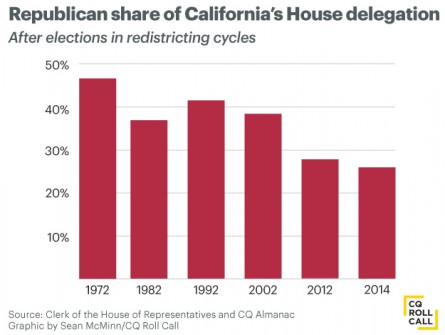 California's district map is a blue strip along the Pacific Ocean , with Republicans holding districts in the more rural farmland and desert inland.

In fact, Republicans saw a net loss of one seat in California in 2014 while nationwide the GOP netted more than a dozen House seats to rise to a historic 30-seat majority.

While national Republicans say they can compete in those four seats they targeted last year, only one of them is rated competitive by the Rothenberg & Gonzales Political Report/Roll Call: Bera's Sacramento-based 7th District, which is rated a Democratic Favored contest.

But Republican strategists had no names to mention as potential GOP challengers to Bera — a seat Obama carried by a slim 4-point margin in 2012. Last Cycle, Bera defeated former Rep. Doug Ose by about 1,500 votes, after Democrats both ran a strong ground operation and successfully painted Ose as an out-of-touch rich businessman. 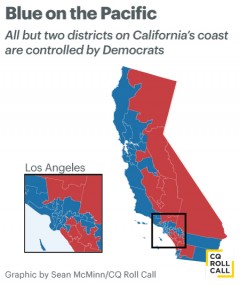 As for the other three seats:

•   In Peters' San Diego-based 52nd District, Republican Jacqueline Atkinson announced a bid earlier this year. But she has struggled in the fundraising game, bringing in just $49,000 in the third quarter — not nearly enough to compete in the pricey media market.

And GOP operatives add that even some Republicans at the local Chamber of Commerce support Peters — a deterrent for other strong Republican candidates to get in.

"Donors have other priorities, and Scott Peters is not one of them," said one California Republican strategist. "[The NRCC] has been really aggressive in talking to people and courting people ... but you’ve got the downtown establishment that likes Scott Peters because they are not ideologically Republican."

•  Over in Ruiz's Palm Springs-based 36th District — which Obama carried by a slim 3-point margin in 2008 and 2012 — Republicans had a candidate in Indio Mayor Lupe Ramos, but she dropped out in June citing a lack of enthusiasm for her bid.

"In the case of the Ruiz seat, I don’t think there’s any Republican who can win that," California Republican strategist Matt Rexroad told CQ Roll Call, pointing to the district's challenging demographics for Republicans and Ruiz's compelling personal story. (Ruiz, an emergency room physician by trade, has saved two passengers on flights to the district .)

But Republican state Assemblyman Katcho Achadjian, whom GOP strategists touted as a top recruit, has not lived up to fundraising expectations. And with the district's historic inclination to support Democrats in presidential years (Obama carried the district by an 11-point margin in 2012), the seat could be a challenge for Republicans in 2016.

Still, while Republicans say 2016 is an uphill climb, they are optimistic the party can make inroads in the state in the future.

"I think for 2016, I think it’s going to be highly unlikely that Republicans mount a significant challenge in congressional races that they did in 2014," Temple said. "But ... the Republican Party is fighting for its competitive life [in California], and it will adapt and survive. That’s what things, people and institutions do."

Related: McCarthy's Future Won't Affect GOP's Hold on His Seat Roll Call Race Ratings Map: Ratings for Every House and Senate Race in 2016 Get breaking news alerts and more from Roll Call in your inbox or on your iPhone.